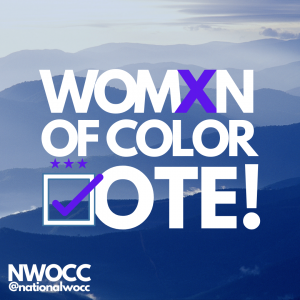 As the nation embarks on one of the biggest elections in its history, media outlets and celebrities alike have continued to push the importance of voting.  Voting is the cornerstone of our democracy, and this election will decide everything from racial equality to defunding the police, marriage equality, womxn’s rights, the economy, and fighting the COVID19 pandemic.  It’s an election of epic proportions and everyone (again, everyone) needs to get out and vote.  But as we encourage all to exercise their right to vote, we must also reflect upon the importance of it.

Today, the statistics are clear - womxn of color have voting power.  The Center for American Progress predicted in 2014 that womxn of color would constitute a growing force of voters.  Since then, the number of womxn of color as eligible voters continued to grow and we’ve become an electoral powerhouse.  In 2000, the voting-age population grew among womxn of color giving them a gain of more than 13.5 million potential votes.  Compared to the 2014 midterm election, womxn of color voting turnout surged more than 15 percentage points in 2018.  Research shows that this increase was due to the increase in the number of Asian American, Native Hawaiian, Latina, Pacific Islander and multiracial womxn voters, in combination with the steady growth of Black and American Indian or Alaska Native womxn voters.  Womxn of color continuously rock the vote and collectively are voices that need to be heard [1].

The power of womxn of color voters has not always been accepted, celebrated, or recognized.   Instead, their voices have historically been suppressed and silenced.  While the 19th Amendment of the U.S. Constitution guaranteed womxn the right to vote in 1920, it did not guarantee that right to all womxn.  While Black American womxn played a huge role in the suffragist movement, racism was still ever-present. Renowned suffragist Mary Church Terrell best articulated their plight: “Seeking no favors because of our color, nor patronage because of our needs, we knock at the bar of justice, asking [for] an equal chance" [2].  Despite their efforts, Black womxn were excluded from the movement.  Even after the 19th Amendment was ratified, most Black womxn still faced discrimination and were prevented from exercising their right to vote [3].  As a result, most Black womxn would wait nearly five decades to exercise their right to vote without the terror of Jim Crow and racism as a barrier [4].

Black womxn of color weren’t the only ones left on the sidelines.  Asian American immigrants’ ongoing fight for naturalization further stymied their right to vote.  Mabel Ping-Hua Lee, a Chinese American suffragist, argued that the women’s suffrage “is nothing more than a wider application of our ideas of justice and equality. We all believe in the idea of democracy; woman suffrage or the feminist movement (of which woman suffrage is a fourth part) is the application of democracy to women” [5].  Despite her stance and those womxn that stood with her, it wasn’t until 1943 that Chinese-American immigrants even became eligible for citizenship and thus received the right to vote.  The 1952 McCarran-Walter Act later granted all persons of Asian descent citizenship and the right to vote.

Latinx womxn also played a major role in the suffragist movement.  Many, including Maria Guadalupe Evangelina de Lopéz, utilized their bilingualism and ability to translate suffragist speeches to spread the importance of the movement amongst Spanish-speaking womxn.  Like Black womxn, Latinx womxn took leadership roles in their communities to fight for the universal right to vote but were left out of the national movement.  Similarly, they faced unwavering discrimination that continues today.  We must also not forget that, to date, Puerto Ricans cannot vote in the presidential election despite being a U.S. territory since 1898 [6].

Although they were the first Americans, Indigenous peoples were not considered to be U.S. citizens until the 1924 Snyder Act.  While Indigenous suffragist Zitkala-Sac, also known as Gertrude Simmons Bonnin, shared that “the Indian woman rejoices with you” after the ratification of the 19th Amendment, she too knew that the celebration did not extend to indigenous womxn.  Indigenous peoples were still prevented from exercising their right to vote until the 1965 Voting Rights Act was passed.  The impact to date is still profound.  Native Americans still have the lowest turnout rates. Researchers suggest that this is a direct result of the lasting impact of colonization and an ongoing distrust of political systems [7].

Left out and voiceless, womxn of color fought the good fight to make the right to vote a privilege.   The fight continues and we still have work to do.  Voter suppression continues to disproportionately affect voters who are of color, immigrants, LGBTQIA+, and disabled.  In each of these categories, womxn of color are greatly impacted.  But, we must persist.  The legacy and sacrifice of the womxn of color that preceded us is the call to action we need to create the future we want and so desperately need to see.  WOMXN OF COLOR, VOTE!   Because our vote matters and our voices must be heard.

For more information about the National Womxn of Color Collective, visit https://nationalwocc.org.

If you have any questions or comments, please contact Brittany Gail Thomas, Director of Communications, by email at bgt@nationalwocc.org.