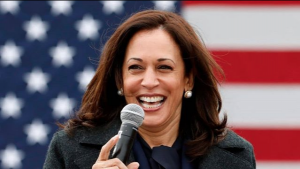 It’s been a long and daunting election season.  Womxn of color around the nation held their breath in anticipation for the hope that Senator Kamala Harris would gain a new title as Vice President, taking her place in the White House as a leader of our nation that has never been held before by any womxn.  Hope prevailed.  Days after Election Day and after a hard fought battle to 270 electoral college votes, Joe Biden and Kamala Harris were announced as the newly elected President and Vice President of the United States.

Vice President-elect Harris’ journey to winning this political ticket wasn’t an easy one but one of great persistence. She was born in Oakland, California and made her way to Howard University, a historically black college, where she earned her degree in political science and economics.  She earned her law degree from Hastings College before becoming a prosecutor for the Alameda County District Attorney’s Office.  Over time, she moved up the ranks by becoming the managing attorney at the San Francisco District Attorney’s Career Criminal Unit and later transitioned to the head of the Division on Families and Children.

No stranger to the election process, Vice President-elect Harris was elected as San Francisco’s District Attorney in 2003 and re-elected in 2007.  By 2010, she was elected as State Attorney General and, once again won re-election in 2014.  In 2016, she once again was victorious but this time for a seat as a United States Senator for the state of California.  In 2017, she was sworn in as the first Black womxn and second South-Asian American womxn in history.  As a Senator, she’s been on various committees and has made her voice heard to combat injustices, especially against womxn and people of color.

Vice President-elect Harris’ voice has continuously empowered and inspired womxn of color.  “What I want young wom[x]n and girls to know is: You are powerful and your voice matters. You’re going to walk into many rooms in your life and career where you may be the only one who looks like you . . . But you remember that when you are in those rooms, you are not alone.”¹   In her acceptance speech, the Vice President-elect said, “While I may be the first wom[x]n in this office, I will not be the last . . .”²  Vice President-elect Harris, you are an inspiration to us all!

We will continue to create a safe space for womxn of color to grow, thrive, and connect in your honor. Congratulations!

For more information about the National Womxn of Color Collective, visit https://nationalwocc.org.

If you have any questions or comments, please contact Brittany Gail Thomas, Director of Communications, by email at bgt@nationalwocc.org.